Alter Cocker Jewish Atheist
No longer take comments. Post's 'labels' are unreliable for linking or searching. Use the INDEX OF POSTS instead. A fairly accurate, but incomplete INDEX of Posts & good overview and understanding of this blog READ SOME REASONS TO REJECT ORTHODOX JUDAISM my April 2014 post or click link above. Born into an Orthodox Jewish family (1950's) and went to Orthodox Yeshiva from kindergarten thru High School plus some Beis Medrash.Became an agnostic in my 20's and an atheist later on. My blog will discuss the arguments for god and Orthodox Judaism and will provide counter arguments. I no longer take comments. My blog uses academic sources, the Torah, Talmud and commentators to justify my assertions. The posts get updated. IF YOU GET A MESSAGE THAT THE POST IS MISSING - LOOK FOR IT IN THE INDEX or search or the date is found in the address.

Human Sacrifice in the Bible

My Passover post  briefly mentions Human Sacrifice in Ancient Israel and it will be helpful to read that article first.

Judaism forbids human sacrifice. However, this post is discussing a very ancient period where it is possible human sacrifice was practiced by the ancient Israelites.

(Sources used are in Bibliography at end) 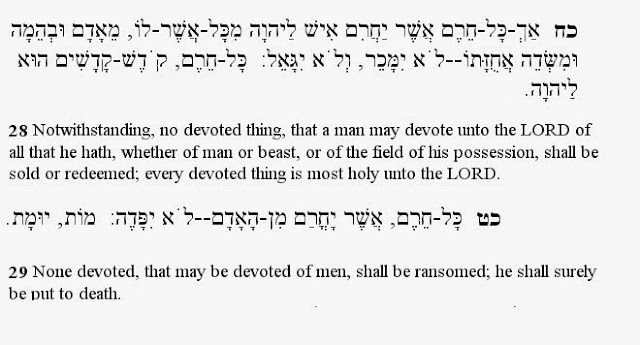 We will see the most likely meaning of verse 29  includes human sacrifice.

Regarding Leviticus 27: 28-29 JPS explains on page 279 the word ‘herem’ [devote, proscribe] used outside of Priestly writings refers to those condemned to destruction : idolaters , defeated military enemies, those failing to comply with a communal oath. Also applies to spoils confiscated from those so condemned. However Verses 28-29 seems to mean another type of ‘herem’: a proscribing by an individual rather than by the community or God. Regarding Verse 29 - “The text shockingly says that one may sentence one-self, one’s slave, or a household member under one’s authority to death as a consecration to the Lord, and once this is done there is no reprieve or remedy. Commentators have interpreted the text differently, but there is little basis for this”.

34 And Jephthah came to Mizpah unto his house, and, behold, his daughter came out to meet him with timbrels and with dances; and she was his only child; beside her he had neither son nor daughter. 35 And it came to pass, when he saw her, that he rent his clothes, and said: 'Alas, my daughter! thou hast brought me very low, and thou art become my troubler; for I have opened my mouth unto the LORD, and I cannot go back.' 36 And she said unto him: 'My father, thou hast opened thy mouth unto the LORD; do unto me according to that which hath proceeded out of thy mouth; forasmuch as the LORD hath taken vengeance for thee of thine enemies, even of the children of Ammon.' 37 And she said unto her father: 'Let this thing be done for me: let me alone two months, that I may depart and go down upon the mountains, and bewail my virginity, I and my companions.' 38 And he said: 'Go.' And he sent her away for two months; and she departed, she and her companions, and bewailed her virginity upon the mountains. 39 And it came to pass at the end of two months, that she returned unto her father, who did with her according to his vow which he had vowed; and she had not known man. And it was a custom in Israel, 40 that the daughters of Israel went yearly to lament the daughter of Jephthah the Gileadite four days in a year.

In short - the text says Jephthah sacrifices his daughter to Yahweh.

Ibn Ezra can not accept the plain text and invents an interpretation - that his daughter became monastic.

But Ramban calls Ibn Ezra’s words empty and explains that indeed the daughter was sacrificed. Ramban interprets Levit 27:29 applying to killing victims of war, rebels, or individual guilty of crimes deserving the death penalty. And says this was the error of Jephthah, that Jephthah misunderstood the verses.

But there are gaping holes in Ramban’ interpretation. Jephthah could have asked one of the prophets, Judges or priests and thus saved his daughter. Also, if there was an oral tradition interpreting the versus (say as Ramban’s approach) then why wasn’t Jephthah or any in his army or his acquaintances or their acquaintances aware of it  ? Moreover, the daughter affirms her Father’s oath, and her companions were not aware Ramban’s interpretation. Finally see previously cited JPS.

{ETA  Regarding Human Sacrifice - Jephthah daughter is an excellent example done by vow. (Page 174 The Role of Human Sacrifice in the Ancient Near East by Alberto Ravinell Whitney Green 1975, page 174)}

{ETA 3/8/2014  Page 470 The Jewish Publication Society Commentary Deuteronomy - Jeffrey Tigay 1996  Regarding  Deut  7:1-2, 7:17, 20:15-18 "Proscription [devoted in the translation I used above] was a well known practice in the ancient world". "One type of proscription was the religious practice of devoting property, cattle or persons (perhaps as victims of sacrificial vows, such as Jephthah's daughter) irrevocable to a deity, that is, to a sanctuary and the priests by destruction or killing. Another type was punitive proscription, which consisted of executing those who committed severe offenses against the gods". (The author references Exodus 22:17 and Deut 13:13-18 as examples). "Proscription of enemy armies and populations to the gods is known from various places in the ancient world." (The author cites Moab, Mesopotamia and ancient Europe.) }

For very important additional commentary see this link Parashat Korach which makes an even more convincing case than I.

- Tearing one's cloths is a Jewish custom when a person hears of the death of a close relative.

- Monasticism and  nunneries  are foreign to Judaism.

- It is hard to believe four days of lament per year for somebody going monastic. ]