Alter Cocker Jewish Atheist
No longer take comments. Post's 'labels' are unreliable for linking or searching. Use the INDEX OF POSTS instead. A fairly accurate, but incomplete INDEX of Posts & good overview and understanding of this blog READ SOME REASONS TO REJECT ORTHODOX JUDAISM my April 2014 post or click link above. Born into an Orthodox Jewish family (1950's) and went to Orthodox Yeshiva from kindergarten thru High School plus some Beis Medrash.Became an agnostic in my 20's and an atheist later on. My blog will discuss the arguments for god and Orthodox Judaism and will provide counter arguments. I no longer take comments. My blog uses academic sources, the Torah, Talmud and commentators to justify my assertions. The posts get updated. IF YOU GET A MESSAGE THAT THE POST IS MISSING - LOOK FOR IT IN THE INDEX or search or the date is found in the address.

This post is being devoted to my replies to various objections to my pagan posts, begun here Explanations of Pagan Customs in Judaism

Objection  #1 Ok,  there are  pagan rituals in the Torah. That does not disprove the divine authorship of the Torah. Yahweh could have placed them in there.

Not just are the Torah rituals similar to some pagan rituals, sometimes the reasons given for them are also similar and the likely reasons are similar. Pagan rituals are based on superstitions, incorrect reasoning and are not effective. Codification of even ONE falsehood  in a book supports the notion of the book’s non divine origin or corruption.  Sure G-d could put false information in a book,  but it seems more likely fallible humans did.

Some of the pagan like Torah rituals are potentially dangerous (for example circumcision) , unfair, scientifically unfounded, bizarre, and wasteful (for example certain Torah prescribed  sacrifices). It seems fallible humans are the more likely reason they are in the Torah. What can possibly motivate Yahweh to codify similar to pagan rituals and sometimes for similar reasons ? G-d is surely inscrutable.

It seems more likely they are in the Torah not because Yahweh  gave them, but because the Torah authors essentially shared similar ANE beliefs, but with devotion to Yahweh and not other gods.

Objection  #2  God  gave Adam and or Noach and or Abraham the ways to worship God. From these origins all ancient peoples tended to worship God the same way, more or less.

Claiming there was an Adam or Noach or Abraham is a form of circular reasoning. You cannot rely on a suspect text to assert something, but we shall ignore this problem.

It can not account for  the prevalence of circumcision - since that was supposed to be a special operation as part of a covenant with Abraham. If so the pagan origin of that custom must be a different

It can not account for why the Zukru festival compares with the spring festivals of Passover and Unleavened Bread, as well as other ritual festivals in west Semitic religion of  the second millennium BC. Was Passover given to Abraham or Adam or Noach. ? Moreover after Yahweh  gave it to one or more of them somehow the pagans learned about it ?

Would God actually have given Adam or Noach or Abraham all kinds of pagan laws and rituals such as animal sacrifice and others ?  God is surely a mystery.

Recall explanation E2) The  Israelites had been steeped in Idolatry. The Torah allowed some pagan practices to continue  as an 'accommodation' to human weakness, but they are rededicated to the worship of Yahweh. It is this sort of notion that Rambam advocates. It follows Rambam was all but saying  the pagan rituals found in the Torah were not truly the way G-d was intended to be worshipped, but are from the pagans. Hence he would reject the explanation found in Objection # 2

Objection # 3 Have you ever read books by Yehezkel Kaufmann ? (Implying  he would disagree with my posts.)

I have not read his books and therefore not sure he would object to anything I have written. From what I have seen he would not agree with the Orthodox Jewish narrative.

From http://www.jewishvirtuallibrary.org/jsource/judaica/ejud_0002_0012_0_10902.html"Although he [Kaufmann] accepted the Documentary Hypothesis of the sources of the Penateuch and the multiple authorship of Isaiah and Hosea, he resisted the tendency to analyze books into increasingly smaller units".

Kaufmann's work is dated and given more recent discoveries I am not sure how he would react.

I have come across his name in some academic literature and his work has been disparaged. Kaufmann's opinions were apparently a minority view during his lifetime and would be more so today.

Page 173 "The unrealistic approach of the late Yehezkel Kaufmann  who held that there was no backsliding in Israel except possibly during the period of Ahab and Jezebel in the 9th century, is, in my opinion, quite untenable"

Page 179 "The latter [regarding  the influence of Canaanite culture on the Israelites] is an exceptionally complex problem, since the early Hebrews were influenced by their Canaanite neighbors,  there were beliefs and practices common to both, and there were later borrowings and adaptations from Canaanite culture during the period of the Judges as well as the subsequent Monarchy....we can state definitely that it does not support the extreme position of the late Yehezkel Kaufmann, who maintained in his great 'History of the Faith of Israel' that mosaic monotheism was a phenomenon entirely peculiar to Israel"

From Frank Moore Canaanite Myth and Hebrew Epic: Essays in the History of the Religion of Israel 1973 in the preface: 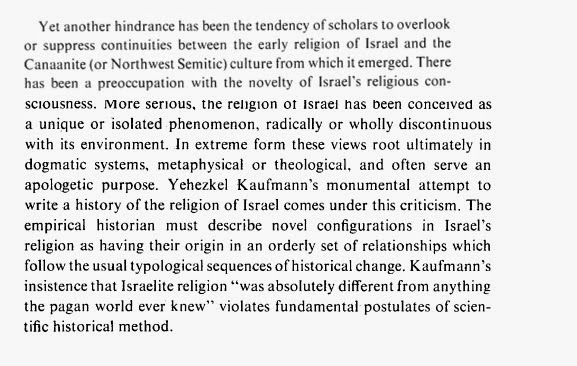 "It is difficult to determine whether Kaufmann attributes monotheism basically to the intuition of Moses and the people, or to special revelation; or whether he considers these as two sides of the same process. He seems to put the emphasis on human intuition and in-sight, rather than on supernatural revelation."

Per Kaufmann -  "The patriarchs before the time of Moses were not monotheists. They were no more than links in the chain leading to monotheism."

"He [Kaufmann] often declares statements in the Bible to be unhistorical or legendary; at several points he rejects the "historiosophy"-philosophy of history--of the biblical writers. He can say of the Torah that it embodies "divergent and at times mutually contradictory matter"

"Kaufmann considers three conclusions of classical criticism as assured (pp. 156-157): (1) He accepts the analysis of the three primary sources, JE, P, and D, together with their laws and narrative framework; the author is especially insistent that there are three separate and mutually independent legal corpora. (2) The present Torah book was not in pre-exilic times canonical and binding on the nation. Before this book came into existence, there was a long period of literary creation by priests and religious writers. (3) Deuteronomy was promulgated in the reign of Josiah, and the Torah as a whole was promulgated in the times of Ezra and Nehemiah "

"Yet, I find myself asking many questions about Kaufmann's theories. In particular, his basic position respecting Israelite monotheism is not convincing. His view of what he calls paganism seems to me distorted, and hence his attempt to interpret the religion of Israel as utterly different and radically new fails. It appears to me to be erroneous history and inadequate theology to say that Hebrew religion was utterly new or unique. "

"Kaufmann does not deny that the pre-exilic literature contains traces of idolatry, magic, divination, mythology, etc., but these are to him merely vestigial remains of an earlier Hebrew paganism, linguistic fossils, poetic imagery, and the like."

The Evolution of God by Robert Wright 2009 beginning page 106 Kaufmann's view which substantially rejects the evolutionary growth of Israelite religion from the local milieu  now lacks foundation. Moreover the consensus is the Israelites who settled the highlands of Canaan came from somewhere within Canaanite society. "...[there] is no reason to doubt that the Israelite religion is  exactly the kind of organic outgrowth of the local culture that Kaufmann...said it wasn't."

He goes on to explain

a) The discovery of the inscriptions:  Yahweh  and his Asherah

b) That some scholars argue Yahweh merged with Canaanite god El and inherited some of El's genes.

c) That Yahweh may have acquired genes from Baal. For example

Baal smites the Lotan (Leviathan) dragon and so does Yahweh in Psalms 74.

Page 504 "All told Psalm 74:12-17, in which  Yahweh overcomes Yam, Tannin, and Leviathan, seems to have a clear kinship to the Ugaritic tradition.."

Beginning on page 120 he lists many other similarities which may interest the reader.

Page 129 "Full fledged monotheism did'nt, as Kaufmann has argued, emerge early in Israelite history 'as an insight, and original intuition'. Early Israelite religion grew out of earlier religions, 'pagan' religions, just as they had done. And out of it, eventually, grew the more modern god of late Israelite religion: a single transcendent all- powerful, all knowing god - the god of the Jews..."

Objection  #4  God is the creator. There are deep meanings to the Torah. Orthodox (Rabbinic) Jews don't believe God needs worship in the same way as the ancient near east people did.

This objection also relates to Objection #3 so read my response there.

Many ancient cultures also believed in creator god or gods, so the fact the Torah claims there was a creator or fashioner is a non starter.

I am not sure where these deeper meanings come from, since the reasons for some of the rituals are written in the Torah text and sometimes those reasons parallel other ANE cultures. Scholars also try to deduce the most likely reasons for some of the other rituals by studying ancient comparative religion and myths. Some of my posts provide such documentation.

The Torah does not provide a consistent monotheistic concept   nor a consistent lofty view of God.  Pagan magic, conceptions and rituals persist in the Torah. They still persist to this day within Orthodox Judaism. My posts have documented some of them.

Just because a particular ritual or prayer is devoted to Yahweh does not make it any less magic or any less pagan in action or conception.

Recall explanation E2) The  Israelites had been steeped in Idolatry. The Torah allowed some pagan practices to continue  as an 'accommodation' to human weakness, but they are rededicated to the worship of Yahweh. It is this sort of notion that Rambam advocates. It follows Rambam was all but saying  the pagan rituals found in the Torah were not truly the way G-d was intended to be worshipped, but are from the pagans. Hence he would reject the explanation found in Objection #4.


Please see Cut Off in the Bible, Statute Forever in the Bible
Posted by Alter Cocker Jewish Atheist at 11:35 PM